Jesus does not come to fulfil the myth of redemptive violence, he comes to begin the Missio Ecclesiae and the Kingdom of the Common Good 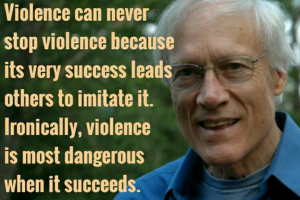 It is poignant that as I encounter the shock of France of the senseless killing of ordinary French people killed for shopping at a Supermarket by an extremist religious fanatic bent on redemptive violence for a misreading of the Koran, it is poignant that the Christian Church remembers Jesus’ triumphant entry into Jerusalem.

The crowds were expecting Jesus to be a King, to bring in a new political theocracy by the sword, to throw our the Romans, and to get back to the idea of the Jewish people being special and better than anyone else. This was the common expectation of the Messiah.

But instead Jesus comes in powerlessness, all he can offer is the love of God, himself, this is all he brings and load of ex-fishermen and wasters from the disliked part of the country.

So Jesus hits head on with these expectations that continue to now.  In many ways Jerusalem is still in exactly the same place it was when Jesus came – divided by hate, divided by religion, and divided by the violent politics of people who believe that the sword is the only way to effect change.

But actually Jesus comes with a different agenda, he comes with the idea of love, that God through the Holy Spirit begins the missio Ecclesiae, the mission of a new social order, the mission of the Kingdom, to build a society based on the common good, on common decency, on common opportunity, on the rebuilding of our common humanity – not to be exploited or oppressed by violence.  But set free, as all are set free to be the fulfilment of love and goodness.

And so Jesus hits head on the Roman Empire, the Jewish Religious Establishment, the evil of the Crusades, and the violence of the World, and actually, Jesus is the only one that will continue – the rest will fall and fade – Jesus and his vision of the Loving Kingdom of God is the survivor.

So as the people welcome the King on Palm Sunday, they do not know what type of King they are acknowledging – even today much of the Church has no idea that Jesus stands against the myth of redemptive violence – and comes as the Prince of Peace as foretold at his Birth.